The more news reportage we get about the UK capital focused media preferred OccupyLSX the more intriguing the reporting becomes.

First off, we had the simplistic (and frankly expected) anti-capitalist label being thrown about the place, with no time given to actually thinking thoroughly about whether the label fits. Sure, there is a banner about capitalism, but one that really points to capitalism being broken. While many in the camp may advocate the end of capitalism, there are many other voices.

The second was the media reportage about the goals of the protest. An absolutely fantastic example of polarising media miss-focusing.

There must always be a right and wrong.
A yes and no.
A left and right.
A good and bad.

The binary-esque focus of the reporting was intriguing as the media tried to grasp what of this or that, the protesters wanted - wrong approach. - Not that kind of protest.

I think this was epitomised by the Bishop of London's invitation for the protesters to pack up and have a place at a debate in the cathedral. Not that kind of protest - not those rules - not that discussion.

So there has been a struggle to understand the point of the protest, who the protesters are, what they want as a resolution and what they stand for - not that kind of protest.

So while the cathedral and media and politicians all implode in a bounty of  hyperbole and the protesters chat Gramsci and Christ we are reaching an interesting moment.

A moment when it seems even the beeb website has recognised that the goals of the protesters and the church .... might actually be the same thing.....

In fact everyone seems to have recognised this...... maybe.

Last year I wrote a presentation about the Bible and Adbusters.

Adbusters is a magazine/website/movement that has really been a key player in the occupy movement, with its issues from earlier in the year encouraging/preparing folk for this November's action.

The Bible is a book that is full of words and prayers about the poor and the broken and injustice and love and hope and resurrection and salvation.

I'm hoping that two pictures will appear on this blog. 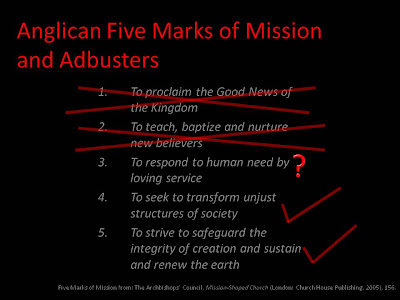 The first is the five marks of mission as seen by the Anglican church, the ppt slide suggests which of these marks of mission adbusters might well be achieving, and the same goes with occupy movement, though it may come to be that, "responding by loving service" is being met by the protest too.

Just a question: how many of those marks does an "average" parish church meet. hopefully all of them to some extent, but from my own observations, there's usually a leaning towards marks 1 and 2.

Bishop Graham Cray is a huge advocate of the concept of integral mission. You can't have the great commission without the great commandment (and vice versa). I'm with him, read some Rene Padilla and get your brain involved. 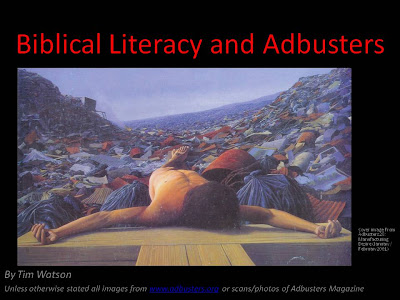 The second picture is a scan of the very first Adbusters I bought, back in Winter 2000 in Ontario Canada, in a Border's, with a Starbucks in my hand.

If we're not careful, we end up chucking Jesus out with all the rubbish of consumption.


How about we stand the cross up in the middle of that rubbish dump.

How about we recognise mission is wide and amazing.


And how about we recognise that people we might not expect are fulfilling parts of the mission of God. (and vice-versa-maybe).
Posted by BeatLiturgist at 20:15 1 comment:

I'm aware that what I'm about to write, may say more about my age and stage of life than other things. And they're half written thoughts, or is that, half thought writes? Years ago when someone left a place: they left. Went. And they'd still be able to be contacted, phone, mail, visits. Think particularly of school friends. As sixteen year olds, hanging out, going through the whole "exam experience". A connection that is built and promises to last. But then school turns into three or four colleges, or numerous employers, and suddenly that connection is shut down (or maybe just paused). After 6th form with a whole new set of friends, experiences, moments, another layer of potential life connections arise: and then: and then: and then: shut down, or maybe just paused, again. Then off to uni, or employment,.... And then postgrad.... And then jobs elsewhere... etc etc etc etc etc. Maybe all the above apply, or maybe only some, or maybe none. But the theme seems to be same. But sometimes something changes. As an undergraduate in approximately 1999 Friends Reunited appeared on my radar and suddenly, a connection could be remade - or at least a one way connection (unless you wanted to pay a fiver for two way communication). You could read what those old connections were up to. See from their point of view, who they were. A few years later, along came a certain book of faces. It became easier to keep in touch with those old friends you'd made such a connection with. It was possible for two way communication and to not only see how those "friends" saw themselves but how other saw them, which others saw them, and where and when they saw them (even to the point of them being able to log which shoe shop they were now at!). It also, it became easier to connect with the kids with the long face who sat three rows back in French in year 9. The conecpt of "friend" changed (and a whole host of other things........) From pre-internet, to Friends Reunited to Facebook the leaps have got bigger. Communication, digital and all that. But these leaps. Huge. Communication. Place. With each step the change in nostalgia, in memory, in experience, in choice jumped too. And with the ever expanding opportunities to return to past places via live streaming - a new leap has occurred. Obviously a change has taken place in what I'm writing about: people of connection, or places of connection. Sometimes both occur simultaneously , for a time at least. It is now possible to not only know what stage of life someone is at as in where they are and connect that way. But also to communicate two way. And to know someone through others. Or to know a place through others experiences of it. It now becomes possible to know a place or experience in a way that is distant, but also somewhat more closely connected. And I'm left wondering about nostalgia and connection and place and all sorts. The field has changed, perhaps its time for an update to John Inge's A Christian Theology of Place, to A Christian Theology of Post Place.
Posted by BeatLiturgist at 21:47 No comments: